Statistical testing is really just a formalization of human intuition. If I flipped a coin 5 times and got all heads, we probably wouldn’t think anything of it. In more formal words, the probability of getting 5 heads in a row isn’t all that low, so we have no reason to reject the null hypothesis that the coin is fair. On the other hand, if we flipped the coin 20 times and got heads 19 of the 20 tosses, we would probably think something is up. The probability of getting 19 heads in 20 coin tosses is about a thousandth of a percent – really low. We have reasonable suspicion to think that the coin is weighted to give more heads than tails.

We apply the same logic with testing for random number generators. We make an assumption that the generator is a true random number generator and then try to prove our assumption wrong. If something seemingly odd happens, we conclude either “there is a reasonable probability that it happened just by chance/dumb luck” or “the probability of this happening just by chance/dumb luck is significantly low.”

Let’s start out with a test that is really not the best for testing randomness. The perks are that it is very straightforward even to stats novices and the results are somewhat more exciting than a typical “pass/fail”. Let’s approximate Pi using a Monte Carlo Simulation.

Disclaimer: I’m not an art major nor could I be. You’re about to find out why.

We start out with this little piece of the first quadrant. 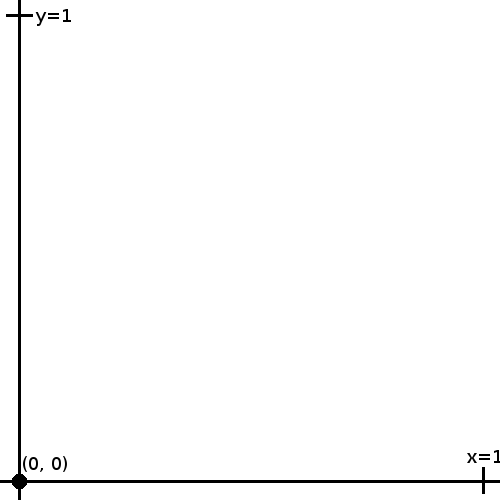 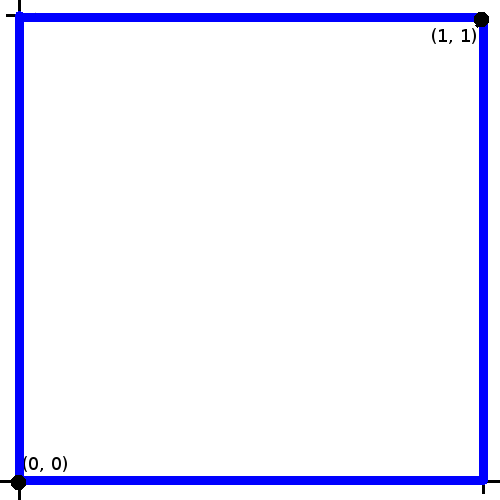 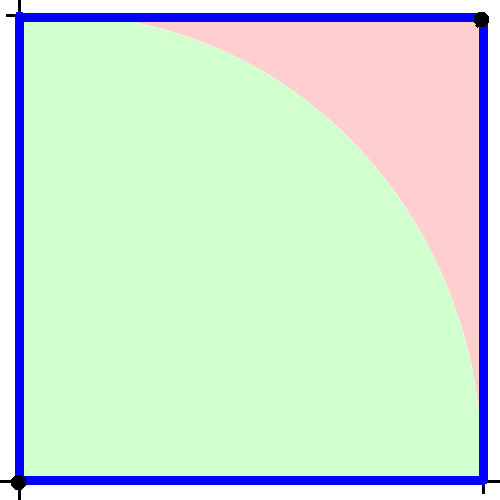 Finally, we generate a bunch of random points that lie within the square. We categorize these points on whether or not they lie within the green region. 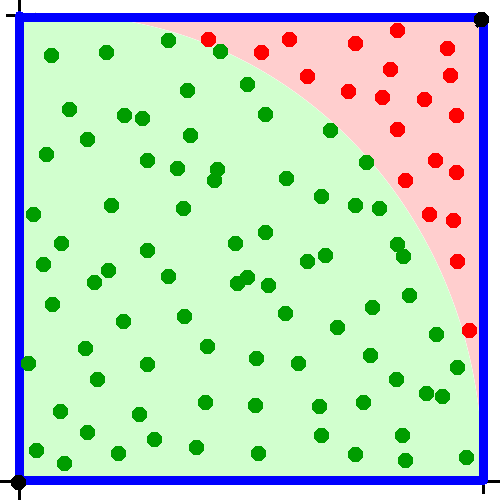 We then use a handy fact of random number generation; a good random number generator will uniformly distribute the points. This means that the ratio of the green points to the total number of points should approximately equal the radio of the area of the quartercircle to the area of the square. That’s pretty neat because we know the area of both of those. A square has an area of \(side^2\). Our side is length 1, so the area of the square is simply 1. A quartercircle has an area of \(\pi * radius^2 / 4\). Our radius is 1, so the area is \(\pi / 4\). Thus the number of generated points in the green region divided by the total number of points is approximately equal to \(\pi / 4\).

I created this method to test a random number generator using the method above.

Let’s see how the generator I created in another blog post squares up against the Middle Square Method (a bad generator) and the Java random implementation. Note that Java random uses a very similar algorithm as my random number generator, so we should expect similar results.

Pretty much as expected, the Middle Square Method fails and the other two pass.

The next test I would like to talk about is surprisingly effective and straightforward. It tests a different aspect of random number generators than the previous test, independence.

To perform this test, we simply generate a large random bitmap. To do that, for each pixel we use the random number generator to generate a true/false value – essentially a digital “coin flip.” If we get an output of true, we will color the pixel black. Otherwise, leave it white.

Here’s the cool part: once the image is generated, you get to perform the test! Open the generated image in your favorite image viewer and have a look. The image from a poor random number generator should have noticeable patterns. The image from a good random number generator should look something like an old television set with the coax cable unplugged.

Here’s the code I wrote for generating random bitmaps.

Let’s check out some actual generated images. Here’s one from my linear congruential generator. 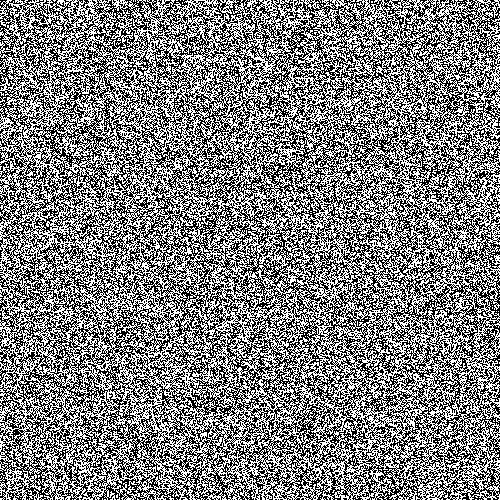 Compare that to the image from the Middle Square Method. 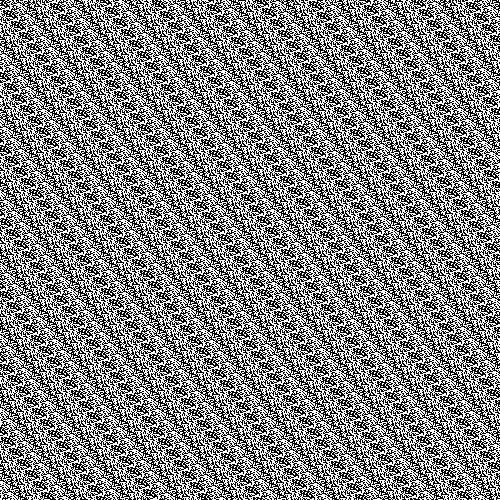 Clearly, there’s a pattern which implies that the random number generator isn’t all that great. In other words, the length of the sequence of random numbers before they start repeating is fairly small. Note that if you generate a large enough bitmap with pretty much any pseudorandom number generator and then stand far enough away so you can focus on a large portion of the image at once, you will see patterns in the bitmap. It’s simply characteristic of all non-“truely random” generators since they will all repeat after some amount of time.

The third test is a little more statistical and a little better test of randomness. Unfortunately, it’s also a little less visual and a little less glorious to talk about. We perform a chi-square goodness of fit test. First, uniformly generate a bunch of integers from let’s say 0 to 9. If we generate 1000, we expect to get 100 of each number. We expect to get around 10 sequences of each number occurring twice in a row. We expect to get around 1 sequence of each number occurring thrice in a row. We run the test for each of these scenarios. Our chi-square test statistic is computed by the formula:

We have \(k-1\) degrees of freedom. K is equal to 10 since there are 10 counters we are comparing to their expected values. At a significance level of \(0.05\), we get a test statistic of \(19.023\). Accordingly, if any of our test statistics are greater than \(19.023\), we reject the null hypothesis that the random number generator is uniform and independent. Here’s my code for running a chi-squared goodness of fit test.

Let’s check out the results for a variety of parameters.

Last but not least, we test the entropy by seeing the zip compression ratio achieved. Once upon a time, a really smart guy named Phil Katz spent a long time creating the zip file format. It employs a very intelligent algorithm designed to search for patterns in the bits of a binary file. After finding these patterns, it encodes them. The result is that the file is comressed, sometimes dramatically depending on the content. Many modern file file formats (like .docx and .xlsx) actually are a zip file containing a bunch of .xml files with templates and content Don’t believe me? Make a Word document, type something, save it, rename the file from .docx to .zip, and open it up! So we’ve established that zip compression works more or less by finding order. Order turns out to be the opposite of randomness, in the file. An ASCII character is one byte, or 8 bits. Generally, in the English language you’ll see 1-2 bits of randomness (more formally called entropy) per character. That means that when a .txt file containing English text is compressed, you’ll see a compression ratio (uncompressed size / compressed size) in the range of 4 to 8. When the text is randomly generated, you would think that you would see a compression ratio near 1 since each and every bit is random. ASCII characters happen to have one parity bit though so for every generated character we get only 7 bits of entropy, not 8. Because of this, our “perfect” compression ratio is about 8/7ths, or about 1.14. Let’s say when we test our generator’s compression ratio, a ratio of 1.15 or less is passing.

How did our three generators square up in the zip test?

As you can see, there’s a wide variety of ways to test random number generators. I’ve presented four of them each with their own merits. Feel free to use them as you choose and I hope they serve you well; perhaps you’ll be the person who creates the latest quick, efficient, and effective pseudorandom number generating algorithm!

Here’s a link to my testing framework.